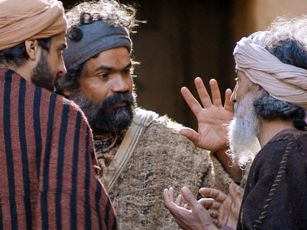 The text this week for our upcoming Palm Sunday service is Mark 11:1-11. It reads:

When they were approaching Jerusalem, at Bethphage and Bethany, near the Mount of Olives, he sent two of his disciples 2 and said to them, “Go into the village ahead of you, and immediately as you enter it, you will find tied there a colt that has never been ridden; untie it and bring it. 3 If anyone says to you, ‘Why are you doing this?’ just say this, ‘The Lord needs it and will send it back here immediately.'” 4 They went away and found a colt tied near a door, outside in the street. As they were untying it, 5 some of the bystanders said to them, “What are you doing, untying the colt?” 6 They told them what Jesus had said; and they allowed them to take it. 7 Then they brought the colt to Jesus and threw their cloaks on it; and he sat on it. 8 Many people spread their cloaks on the road, and others spread leafy branches that they had cut in the fields. 9 Then those who went ahead and those who followed were shouting, “Hosanna! Blessed is the one who comes in the name of the Lord! 10 Blessed is the coming kingdom of our ancestor David! Hosanna in the highest heaven!” 11 Then he entered Jerusalem and went into the temple; and when he had looked around at everything, as it was already late, he went out to Bethany with the twelve.

Given that we tend to read this text only for the purposes of our Palm Sunday services, we tend to overlook some of the richer details of the story. If you think about it, Mark spends seven of the eleven verses of this passage talking about the disciples’ task of fetching and untying a donkey.

Let that sink in for a second. Amidst all the “leafy branch” waving and the shouts of “Hosanna,” the writer of Mark seems to be preoccupied with a rather mundane task that is neither sexy, theologically speaking, or appealing as a practical task. Donkeys are stubborn, they smell, and fetching them is menial in the way that cleaning the bathroom or cleaning a stable is lowly.

I can well imagine the disciples’ mindset prior to Jesus’ instructions. Here is Jesus, ready to make his way triumphantly into Jerusalem, fulfill the messianic hopes of the people, set the world to rights, and put Caesar and those who collaborate with him in their place. As Marcus Borg and John Crossan point out in The Last Week: A Day-by-Day Account of Jesus’s Final Week in Jerusalem, Pilate was likely making his own procession into the city at the head of several legions of imperial troops, and Jesus’ march was a “counterprocession” to Pilate’s. The contest being put on display here is between two different kinds of power:  imperial power rooted in domination and intimidation, and the everyday power of common folk who place upon Jesus their hopes for a coming kingdom where they will have their concerns heard and hopes elevated.

Given this framework, the disciples were likely readying themselves to take places of prominence at Jesus’ side, excited at the prospect of co-officiating, co-leading Jesus’ procession and eventual enthronement as God’s own King who will rule over all, establish justice, and restore Israel to its rightful place on the world stage. You can hear in the background the disciples’ squabble from the previous chapter (10), verses 35-45 where James and John ask that they be seated at Jesus’ right and left hand in glory. The time has come, they have been faithful (they feel), and now is the time for all that work of following Jesus around to pay off.

Jesus, of course, had a different idea in mind. In verses 1-2, he sends them out (apostellei) on an important mission in preparation for his triumphant entry: go and get me a donkey. Verse two, especially, is instructive as to how Jesus gave the order. Go! (hupagete) and when you get there, you will immediately! (euthus) find the donkey, and when you do, untie! (lusate) it and bring! (pherete) it to me. Throughout this verse, Jesus wastes no time discussing the matter, but instead uses imperatives to order them to do this duty. With Markan impatience, all will be done immediately. If it weren’t so comical, you would mistake Jesus’ words here as on par with secret orders from a military commander.

Yes, I believe the scene, the mission he has sent them out on is comical from a certain vantage point. Ordered to untie donkey knots, we can well imagine the disciples’ hearts being tied into a knot of confusion, disappointment, and possibly anger. This is a task better suited for a stable boy or common street urchin, not Jesus’ close friends and followers! To make matters worse, Jesus even gives detailed instructions to the disciples on how they are to untie it, and the response they are to give if they are asked what in the heck they are doing. Jesus knows that sending a group of grown men — disciples even! — on such a task will draw glances and derision from onlookers.

Yet, I believe that Jesus is teaching two very deep and important lessons here. In line with Borg and Crossan, while Jesus is setting the stage for a counterprocession, Jesus also understands that openly defying Roman Imperial displays of power and domination will require changes in the hearts of those that would follow him if they are to eventually prevail. The disciples need to hear and adopt the lesson that Jesus’ kingdom, God’s kingdom, does not follow the familiar patterns of power — as John has Jesus tells Pilate, his kingdom “is not from this world.” (John 18:36) Instead of powerful processions, stately steeds, and the beat of the drums of war, Jesus sends his first wave of “troops” in to loose the bonds of a lowly donkey that will serve as a symbol of the establishment of a new order, God’s order rooted in humility and love. This lesson will last longer than an embarrassing afternoon, and will become a model of Christian love, service, humility and perseverance for the harsh decades and centuries to come under Roman persecution.

If this is true, then the second and greater lesson is that there is nothing we do, no service we render, no task we undertake as the people of God that is without dignity or will go unrecognized in the kingdom of God. The disciples aside, even this most common donkey finds a starring role in the work God is doing in Jesus. If you think about it, every year we remember this beast. If the donkey had a name, we would remember it as surely as we remember the names Peter, or James or John because it carried our Lord on its back as he made his way to Jerusalem. Even a lowly donkey is a member of our Christian family, our story in a strange sort of way.

For the disciples, loosing that donkey that day is the mission the disciples are sent out, “apostled” (apostellei; verse 1)  to accomplish. I know it is easy for us, like the disciples, to suffer from delusions of grandeur that we are accomplishing the great evangelistic mission of the church on our own by the power of our “great” preaching, “awesome” worship presentations and our “generous” mission programs. All of these things are important, to be sure, but we never accomplish these things on our own, and if we are honest about it, even the greatest success stories of Christian proclamation are the effort of many, many faithful brothers and sisters laboring to accomplish the work of our master. Most of the time, God’s mission is accomplished on slight scales of least visibility, constantly at work in the background as the powers of the age rage. Most importantly, our work takes shape and meaning in light of Jesus’ instructions to us, like he did for the disciples, and in the power of the Holy Spirit.

Yes, even in a donkey knot, the great work of the kingdom can be enacted by servants who are faithful to carry out our orders, even when those tasks seem less than ideal, grand or “important.”