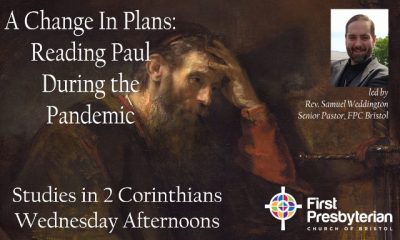 For those who are interested, you can listen to this Bible study:

The key word or concept for today is our title, “good grief.” We are doing things a little out of order. We are looking specifically at 2 Corinthians 1:23-2:13, but we are doing that through the two verse lens of chapter 7, verses 9-10. There, Paul makes consistent reference to grief, anguish, and pain, but how those things are transformed by God’s love, and become a “godly grief,” or as I’ve taken liberty with it, “good grief.” As NT Wright puts it, there is a rhythm to Christian life, and it is the rhythm of sorrow and joy. How we walk through such trials marks our lives out as conformed to the love of God in Christ Jesus.

Let’s turn our attention to Scripture:

Step back with me for a moment to chapter 1, verse 23 . Starting here and going on to chapter 2, verse 4, Paul gives greater detail to the explanation for his absence begun in chapter 1, verse 15. Yes, Paul’s plans and God’s plans for Paul didn’t line up, but Paul reveals that this was necessary because of the pain he knew a visit too soon would cause.

As we have the timeline, the letter we call first Corinthians had been given, and that was followed by an in-person visit where Paul and the community was deeply wounded. All the plans as it related to the collection and Corinth’s place in that were up in the air. We learn in chapter 7, Titus was sent ahead with a letter lost to us to clarify issues, and see if a visit was even possible. We can speculate from chapter 2, verses 12-13 that the plan was to have Titus go ahead, smooth things out, and get back to Paul in Troas before he would embark on the next leg of the journey.

As we see in that passage, when Paul gets to Troas, Titus isn’t there and another opportunity presents itself, so he goes that direction. While Titus eventually returns and catches up with Paul with the good news that reconciliation in Corinth is possible, Paul’s course has been set. He would not be following his original itinerary, and this would create all the controversy about Paul being wishy-washy and unreliable. Paul is defending himself here by arguing that he didn’t press forward on his initial plan to visit them first because he knew these intermediate steps needed to be taken, and pressing forward would have caused unnecessary pain, as he states clearly in chapter 2, verse 1.

As we learn in verses 5 through 9, a lot of the initial hurt and controversy was likely caused by Paul’s censure of the man who had marital relations with his mother-in-law. You can read about this in 1 Corinthians chapter 5. In the interim of all the anxiety Paul and the community experienced as Paul made his way into Macedonia rather than coming to Corinth, the community had gone ahead and expelled the offenders from the congregation until they repented. Judging by verses 7-8, it seems like Titus has returned with news that the censure had worked, and the man and his mother-in-law have repented and turned from their wickedness. Paul goes on in verse 10 to suggest that in light of their repentance, the community had forgiven the man, and Paul assures them that he has forgiven him as well.

It is in this topsy-turvy story of conflict, pain, hurt feelings, censure, eventual repentance, and forgiveness that we come to chapter 2, verse 14 where Paul talks about the designs of Satan. A wonderful lesson for us, even today, is that one of the primary ways Satan works against God’s redemptive purposes is to distort the witness and the unity of the church. This conflict we have read about had all the makings of a controversy that would have forever distorted and destroyed the unity of the church in Corinth, and we can bet that the Devil would have been pleased if that were the case.

But it wasn’t, and that makes this letter a powerful witness. As Paul illustrates, there is an inextricable link between love and pain in the Christian life. Just as God’s love for us in Christ Jesus met the deep pain of the world on the cross, there are times in our life together when the love that we have for one another meets our mutual brokenness. Christ reconciled God’s love with the pain of a broken world by taking it onto himself, and enduring faithfully in hope that the Father was faithful, and could bring life out of death. Our love in Christ reconciles our broken relationships by enduring the pain in the hope that the Spirt will mend what is broken.

Paul shows us this example in chapter 2, verse 4 when he writes, “For I wrote to you out of much distress and anguish of heart and with many tears, not to cause you pain, but to let you know the abundant love that I have for you.” Paul is willing to stand in the gap between this great love and the necessary pain his censure causes and bring them together in the hope that God would work out a wondrous reconciliation. This would not only heal the community by excising the grave sin that was staining its witness, the process would actually strengthen the bond of unity within the congregation. This whole process, we see summarized in chapter 7, verse 10, is one where godly grief, or good grief, or good conflict brings us to a place of confession, repentance where we can be healed. God’s work of bringing life out of once dead relationships and situations is a fruit of our salvation.

Let’s just be frank: most of us don’t like conflict. Unfortunately, we are often caught up in it, especially in our digital age, and on numerous social media platforms. Conflict is a recipe for soured relationships that brings quick judgment, with no direction out of the dark and into the light of reconciliation, peace, and hope. Conflict, as we typically encounter it, is measured in slights and hurt feelings that tell us a story about ourselves and others that leaves no room for us to see the need for healing in our neighbor and ourselves. It seems impossible to imagine conflict working in any other way. Here Paul is right: worldly grief produces death.

But godly grief, good grief, godly conflict, if I might say that, is different. Here, our pain from conflict with our neighbor is always measured by the standard of the cross and the rolled away stone. As Christ followers, we see in the conflict an opportunity for us to die so that, in God’s time, we might experience resurrected life. Maybe our pride needed to die; maybe in a present conflict, distorted patterns of power or behavior need to be broken. Yet, in the end, the Father in Christ in the power of the Spirit stands next to us, ready to raise our broken relationships and hopes into a new way of being, a place where we can be healed, and so can our neighbor. In the end, conflict for the Christian becomes a site of healing, and that healing becomes a source of joy as we see God bring the dead back to life. In Christ, all our grief is destined to become good grief.