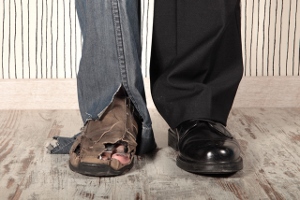 7 Now as you excel in everything—in faith, in speech, in knowledge, in utmost eagerness, and in our love for you—so we want you to excel also in this generous undertaking. 8 I do not say this as a command, but I am testing the genuineness of your love against the earnestness of others. 9 For you know the generous act of our Lord Jesus Christ, that though he was rich, yet for your sakes he became poor, so that by his poverty you might become rich. 10 And in this matter I am giving my advice: it is appropriate for you who began last year not only to do something but even to desire to do something— 11 now finish doing it, so that your eagerness may be matched by completing it according to your means. 12 For if the eagerness is there, the gift is acceptable according to what one has—not according to what one does not have. 13 I do not mean that there should be relief for others and pressure on you, but it is a question of a fair balance between 14 your present abundance and their need, so that their abundance may be for your need, in order that there may be a fair balance. 15 As it is written, “The one who had much did not have too much, and the one who had little did not have too little.”

In my last post, I concluded by saying that the generosity Paul commends is rooted in what we have already received in Christ Jesus. In this next section of chapter 8, Paul goes further, presenting us with the person of Jesus as the defining vision of God’s generous heart, beckoning us to reflect that same generosity.

To that end, Paul’s vision of generosity rooted in the person and work of Christ is a profound challenge to us and our culture given that we tend to frame the concept of generosity more in terms of personal benevolence. In the United States, we often set aside special days and observances to challenge individuals to be generous, appealing to the “better angels” of their nature. However, while I don’t want to question the inherent goodness of giving, it is interesting to me that the more we ground the concept of giving in concepts of personal goodness and benevolence, the more giving becomes tied to a consumerist model.

Isn’t it interesting that in the United States, “Giving Tuesday” follows “Cyber Monday,” the busiest day for online commerce in our nation? In that same cycle, Cyber Monday is preceded by the first Sunday of Advent, but there are no mass appeals to give based on our sense of gratitude that God has been generous to us. That Sunday is preceded by a Saturday of no real import, evidently, the preceding Friday is a truly monumental day for our society: Black Friday. People get up at 3 or 4am to make their way to get a low priced television they saw advertised. All of this is preceded by what I want to call “Overeating Thursday,” aka Thanksgiving. In other words, charities make appeals to our own evaluations of personal morality and obligations to be benevolent by targeting our inherent sense of guilt stemming from our consumerism and gluttony.

I am saddened that our culture has become so consumer oriented that even generosity itself seems to be co-opted by the logic of boom/bust, famine/feast. Gratitude has become transactional. I fear what defining generosity in this way portends for us all.

With this in mind, let’s take up chapter 8, starting in verse 7. As we discussed last week, Paul is appealing to this wealthy community in Corinth to fulfill the promises they have made to support their brothers and sisters in Jerusalem. The simple truth of the matter is that Paul is not very good at asking others for or talking about money. He will spend these entire two chapters talking around the subject, doing what he did last week of appealing to their pride by comparing the generosity of the poor churches in Macedonia with their chintzy disposition.

In this section, he continues with his appeal, but he does it using a beautiful tactic. Yes, he tells them in verse 7, they have so much that it overflows. No, he tells them in verse 8, he isn’t commanding them, he is only giving testing their seriousness out. On and on he has gone, and will go on as he dances around what should be a straight ask for support, but he does the most beautiful thing in verse 9: he points to the cross; he points to Jesus.

At the heart of the Gospel story is the simple reality that God has been overly generous with us. In no way have we deserved this wondrous grace. We are all paupers before God. Nevertheless, while we are paupers, in Christ, we have been given everything. Out of the overflowing abundance of grace that is the love of God came the Lord Jesus Christ who took on our poverty so that we might be elevated in status, and become full heirs within the household of God. The grace of God was not, nor has God ever been content to silo his grace to a particular people or a specific time, or make it transactional. In Jesus, every day is a gift and an opportunity to give.

If we, as the people of God, can get our heads around this logic of grace, and our hearts detached from the logic of consumption, we might begin moving a little closer to what our communities might look like, as Paul describes it in verses 14 & 15. When our hearts are unlocked by the deep generosity of grace, our abundance fills the need of others because their need is the beckon call of grace to allow love to flow between us. In other words, it is out of the give and take of life shared together as one body in the power of the Spirit, in the ebb and flow of need and abundance, that the bonds of fellowship are stitched together and grow as we learn to take care of each other.

A community centered on the grace of a king who became poor so that we might become rich is a group of men and women who seek ways to enrich the lives and hearts of their brothers and sisters such that all are fed and made whole. A community of believers oriented to live this way become wellsprings of life in a world busy silo-ing and transacting everything around endless consumption, exhaustion, and collapse.